Todd Bermann started TAB Technical services in 1978, specializing in restaurants with a client roster that grew to include hundreds of franchise-wide locations of California Pizza Kitchen, Islands Restaurants, and over 300 worldwide locations of The Cheesecake Factory. The Hollywood Bowl and Walt Disney Concert Hall are also among their bespoke clients for services including CCTV, MATV, and back-of-house systems. 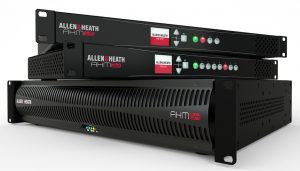 For an upcoming Cheesecake Factory in North Beach, Miami, Bermann and his team designed in two brand new products from Allen & Heath—the AHM-32 and AHM-16 matrix audio processors. TAB has been a longtime user (and fan) of the now-discontinued A&H iDR8 matrix mixers and has widely deployed them for The Cheesecake Factory.

In adopting the just released AHM-32 and AHM-16 and eventually standardizing on them, the TAB team will benefit from the innovations of another popular A&H product—the flagship AHM-64. The AHM-64 debuted two years ago and has found wide adoption in worship, theater, corporate, retail, and education. The AHM-64 was designed to support industry requests for scalable I/O and remote control, rapid setup, and Dante integration. The 96kHz FPGA engine supports high quality audio and low latency. Ready-made remote-control options include an array of PoE remote controllers and the BYOD-friendly Custom Control app.

Now technical features of the AHM-64 have been scaled into these two smaller options, making the AHM series more accessible and, as it turns out, perfect for the new Cheesecake Factory. Two purpose-built touchscreens are new part of the install range as well. The CC-7 and CC-10 will allow TAB to simplify the system design and give the Cheesecake Factory everything they need and nothing they don’t.

This year’s Wimbledon created new records for lots of reasons, and not just on the hallowed courts.