The Super Bowl LVI television event on Sunday February 13th, was the most watched TV show in five years with over 112 million viewers taking in the sporting action and the hugely anticipated half-time music show featuring hip-hop headliners Dr. Dre, Snoop Dogg, Eminem, Mary J. Blige and Kendrick Lamar. Consoles and audio kit from Calrec, DiGiCo and Solid State Logic were extensively used to deliver the broadcast and entertainment audio, with technical help from many of our own teams.

Multiple Calrec consoles were involved in several aspects of the NBC live broadcast coverage and providing feeds to international broadcasters, both in trucks at the venue and remotely via the Calrec RP1 remote production core. The pre-game live broadcast was mixed by Florian Brown on an Apollo console, and the game itself was mixed in NEP’s ND1 remote unit which has a 72 fader Apollo console and a 48 fader Artemis console; the Apollo mixed the live programme output and was mixed by A1 Wendel Stevens, while game FX was mixed on the Artemis by Ryan Outcalt and fed into the Apollo. As the Super Bowl clashed with the Beijing Olympics, legendary NBC television host Mike Tirico flew back from China to Los Angeles to continue coverage of the Olympics remotely from NBC’s Lake set facility using an RP1 which was mixed at NBC’s Stamford facility, and then took on commentator duties for the Super Bowl on the Sunday! 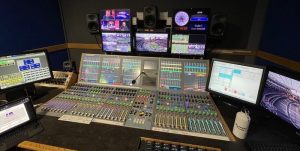 The musical segments during the pre-game and halftime shows at this year’s Super Bowl were mixed on a SSL System T broadcast console installed at the NFL’s new West Coast headquarters, rather than the usual dedicated remote truck — a first in the history of the championship game. Tom Holmes, A1 for the broadcast music segments at Super Bowl LVI, was responsible for mixing not only the hip-hop legends halftime show, but also country music artist Mickey Guyton’s performance of the “Star Spangled Banner” and R&B artist Jhené Aiko’s rendition of “America the Beautiful.”

The live-sound mix in the venue for the halftime event, the opening ceremonies, and the Lombardi ceremony were handled on DiGiCo SD5 live consoles by Super Bowl veterans Alex Guessard for front of house and Tom Pesa on monitors. Such is the investment in the entertainment audio that each engineer mixed using two SD5 consoles running in mirror mode, with the second console as a failover backup. 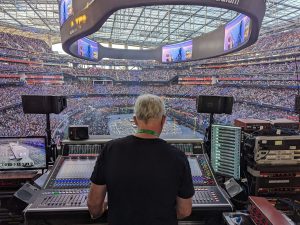 Gary Trenda, RF Application Engineer for Sound Devices, was hired in for his sixth Super Bowl taking care of all the entertainment wireless systems, including wireless microphones and in-ear monitors, with two other RF Technicians on the team. With wireless equipment on the field for pre-game and halftime, as well as the referee microphone and a microphone for the post game Lombardi Trophy presentation, Gary and his colleagues had their work cut out to keep everyone live and happy, including the worldwide audience.

This year’s Wimbledon created new records for lots of reasons, and not just on the hallowed courts.